How to Grow and Sustain a Winning Culture in Senior Living

“Winning corporate cultures allow you to attract the best leaders,” said Tim Smick, President and CEO of Harbor Retirement Associates. Smick was one of three execs who discussed “How to Grow and Sustain a Winning Culture” which was moderated by Senior Housing Forum’s Steve Moran.

Creating a ground-up, empowering work culture is the only cure for high turnover and poor job performance. All panelists, including Lori Alford (Avanti Senior Living) and Sloan Bentley (Lifespace Communities) agreed on this.

These three represent a range of senior living options; from large and established (HRA) to non-profit (Lifespace) to a provider that positions itself as forward moving (Avanti, founded in 2013). HRA operates 20 communities and employs over 1,500 associates; Avanti has one open community with 6 more opening soon; Lifespace has 12 locations in seven states and a staff of 2,800.

Their thoughts on cultivating a winning culture were surprisingly similar.

“Culture is leadership, tone and expectations,” says Bentley, who stressed that all businesses have a corporate culture, even those with passive or neglectful leadership. However, almost all positive, effective corporate cultures are set by leadership and reinforced constantly.

“Culture happens. If you don’t set it as a leader, it (still) happens,” she says. “Our first focus is culture definition for our team members.” Her organization provides new employees with two days of intensive training, helping them acclimate to Lifespace’s work environment and approach to care.

When asked about their corporate cultures, Alford stressed her company’s empowering approach to hiring, training and managing employees. At Avanti, an employee’s problem-solving skills are valued over conformity and obedience, she says.

“When we talk to our team, we stress that it’s okay to be different, just always be you. We tell new employees that ‘We’re all Gumby.’ We’re fluid and flexible and looking to do things faster and different.”

Training employees they hire from within the senior living industry has been a challenge because, in general, they’re comfortable with following a lot of rules, rather than thinking for themselves and showing initiative, Alford says. “Two years ago when we started this organization, we thought it (hiring/training) would be easy, but it’s been challenging, because people come to us expecting bureaucracy.” 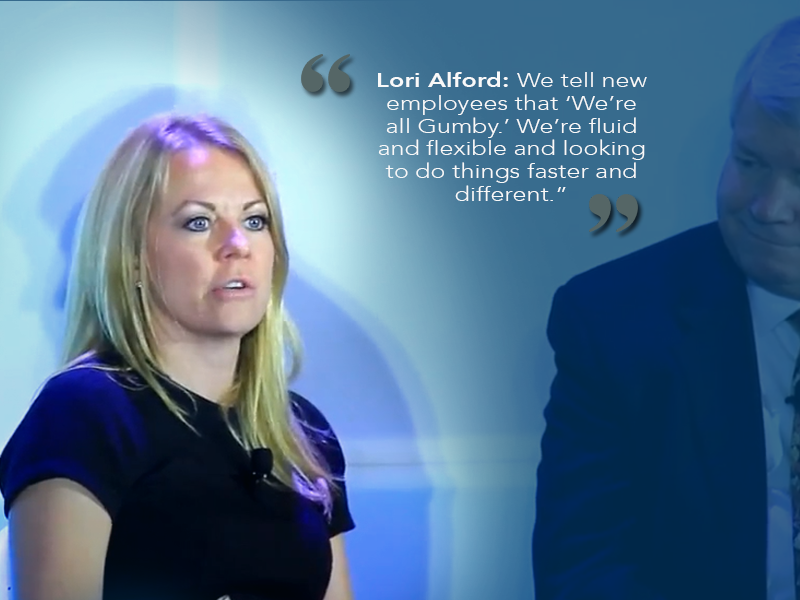 She adds, “Sometimes it’s like turning around a steamboat in a bathtub. It’s taken some folks who join our team awhile to believe it’s okay to question, disagree and have an opinion.”

“And know that you won’t get fired for it,” Alford says. “Everybody is a leader in our organization and we infuse that to them constantly.”

Smick wasn’t afraid to address the issues of ethics and morality in the hiring process, especially for leadership positions—roles that set the tone for their communities.

“The bottom line is that our mission is about: caring for seniors with respect and dignity and the best executive directors are people who really want to make a difference.”

A strong moral compass is essential, he adds. “When hiring a new executive director, I need to know they will act in moral ways. In (hiring) interviews, it’s frustrating, because many won’t acknowledge that there’s an absolute moral right and wrong,” the CEO says.

“There are a lot of muddled grey areas in our industry and I need to know my executive directors will use some wisdom when applying their concept of moral right and wrong in these areas.”

All three panelists emphasized the importance of recognizing and rewarding outstanding staff members.

“We invest heavily in what we call ‘Catching people doing it right,’ and we champion them in a big way by making them heroes within the company” says Smick. Each year Harbor Retirement hosts a banquet and they fly in not only top executives, but also line employees who best represent the organization’s core values. 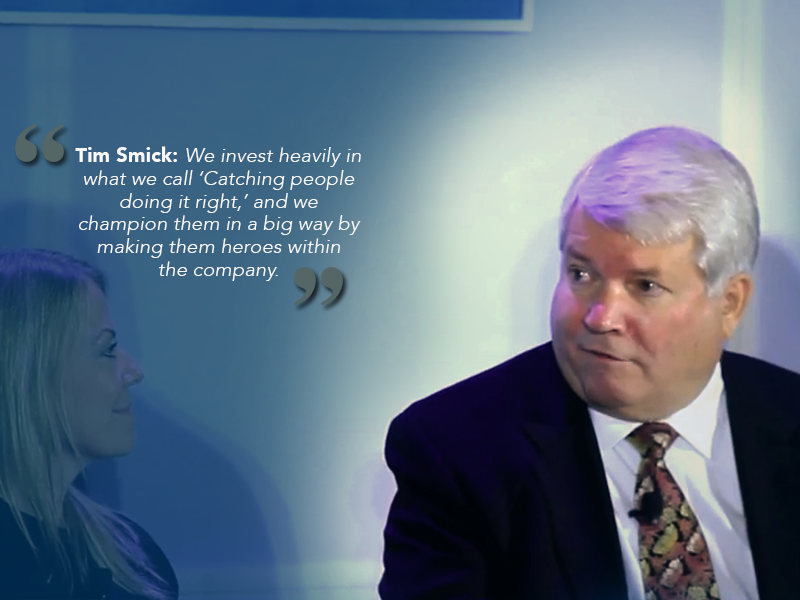 “Many of these people have never been in an airplane or stayed in a hotel,” he says. “This is one way in which we sustain core values; it becomes clear that our values are more than just a rain dance. Other employees hear about this award and know it could be them next year.”

Since Bentley works for a not-for-profit, her discretionary budget is smaller. However, she has been impressed with the professionalism of the Lifespace staff at all levels. “When I came here, I was impressed with low turnover,” she says. “We have people (including caregivers) who have been here 40 years.”

Her organization recognizes excellence and experience by having long-term employees mentor new staff members and by implementing and publicly recognizing great ideas, most of which come from line employees, not managers or executive directors.

Avanti celebrates excellence by treating its staff well on a daily basis, Alford says. “We can tell our teams:

“We have a full salon in our building and when a new employee comes to work for us, they get a free service—hair, manicure, massage, they pick it. And this includes everyone, down to the cleaning crew.”

Getting the Message Out

Bentley admitted that, in the past, Lifespace may have been too low-key in its approach to management and sharing its message with residents, family members and staff, letting them know that leadership was going to be more centralized, with a stronger message from the home office.

“We were acting like a small company and we were really rather a large company,” she says.

“So we put together a communications campaign because we were sort of a quiet home office. (Previously) our executive directors were captains of their own ships, the CEO of their own building,” Bentley says. “We had to let them know they were going to be part of a navy and that there would be navy influences as well.” 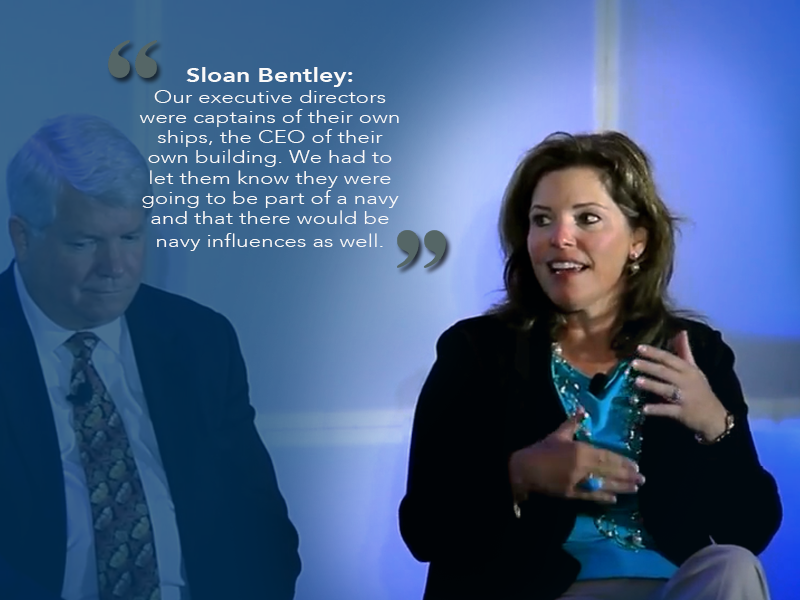 Smick reiterates the importance of a motivated, unified staff to succeed in the senior living industry. “This isn’t soft stuff. I visit a lot of the competition and I’ve seen that if you go into a market with an A Team in a C+ Community (physical plant) and then if you go into a Market with a B- Team in an A Community, The ‘A Team’ is always winning.”

“And, believe me, a strong corporate culture is a powerful thing in attracting the crème de la crème,” he says, making a second vital point. “I’ve also noticed that there’s a direct correlation between workmen’s compensation claims and employee dissatisfaction.”

Avanti’s Alford used a small example to make a big point. “Is your team picking up the piece of lint that’s on the floor or are they walking past it ‘cause they’re too good and it’s not their job?”’ she asks, emphasizing the answer reflects directly on a firm’s culture.

“When they do, that’s when you know you’re getting it right, when you walk in and get that warm and fuzzy feeling,” Alford says. “And it’s an art. There’s no right or wrong culture.”

You can watch the full discussion below: