Lessons in Innovation from Darryl ''DMC'' McDaniels of Run-DMC

Life rarely goes according to plan. Just ask Darryl "DMC" McDaniels, of Run-DMC, who never had any intention of getting into the music industry—he just wanted to make comic books.

"Me pretending to be a rock star or hip-hop artist was like me running around with a blanket around my neck saying, 'I'm Batman,'" he told Michael Owens, co-founder of influence group, during an on-stage interview at the Senior Living Innovation Forum. "It was just a play-pretend thing. I had no idea I was going to have a music career."

When asked why he was brought to speak at a senior living industry event, McDaniels joked, "Because I'm a senior! I'm 55 years old!" He then said his dream retirement home would be one that had Paul McCartney, Keith Richards, and Mick Jagger, and who could argue with that?

But all jokes aside, the truth is that the senior living industry can learn a lot from McDaniels and his career with (and after) Run-DMC. His life has been defined by defying expectations at every turn and coming out on top for it again and again. Today the Run-DMC brand, with the iconic all-caps stacked logo, is one of the most recognizable in the world, and their legacy is as one of the most influential hip-hop groups in history. They achieved this by intentionally not looking or acting like everyone else in the industry, by taking chances and shattering the mold—redefining what "hip-hop" even meant.

Through a chance encounter with a young Joseph Simmons—the "Run" to McDaniels' "DMC"—while playing basketball in middle school, his hobby, his "superhero secret identity," of writing hip-hop lyrics was discovered. Simmons, then just 12 years old, promised McDaniels that when he got older and his brother let him make his first record, he'd be calling. His brother happened to be Def Jam Recordings founder Russell Simmons.

But that was middle school. McDaniels then went off to an all-boys Catholic high school, a different high school than Simmons, and in his senior year was told, "Pick what you want to be in life." What he wanted to do was draw comics; what he said was "business manager." He was accepted into St. John's University and on the day he got his acceptance letter, he ran down to his basement and wrote a rhyme about it.

Just a few months later, McDaniels got a call from Simmons: "Grab your books; we're making a record."

That rhyme he jotted down in his basement became the basis for the track "It's Like That," now considered one of the greatest hip-hop songs of all time. Almost overnight, McDaniels was a hip-hop star.

"If you're passionate and you love what you do and you're sincere about whatever it is that you like, there is magic in that"

"The things that happen to you academically, and personally, even recreationally will prepare you to succeed at whatever it is you're going to do," he said. "The reason why I was able to have such a good career was because I was always prepared. By me reading comic books, I had a great imagination. By being a good student, that meant I knew a little something—I was very educated. And by me putting the imagination with the information, when it was time for me to go make a record I was prepared."

Run-DMC were trailblazers. They were integral in shaping hip-hop as we know it today and made history as the "first" of many, many things.

"If you're passionate and you love what you do and you're sincere about whatever it is that you like, there is magic in that," he said. "When we wrote the song 'My Adidas,' we didn't write the song so that we could get an Adidas deal. We wrote the song because at the time we were rhyming about everything, so it was like, 'Hey let's make a record about our sneakers that we love.'" 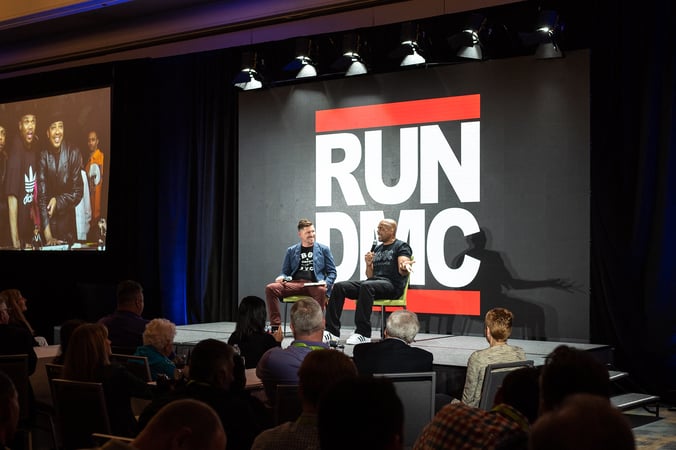 According to industry legend, during a monthly sales meeting at Adidas the executives were puzzled by the sudden spike in sales of the old ‘Superstar’ style. An intern had to clue them in—it was because Run-DMC was rapping about it. The company sent a rep to the group's sold-out show at the Madison Square Garden, and when they played the song "My Adidas," some 15,000 fans held their sneakers up along with McDaniels. After that, Adidas gave them a $1 million endorsement that included their own signature sneaker line, and Run-DMC found themselves accidental influencers.

Run-DMC was also the first hip-hop group to partner with a rock band for a rap/rock "mash-up" in Aerosmith's video for "Walk This Way."

"People say when Steven Tyler knocked that wall down in the "Walk This Way" video, that didn't just happen in the video—it happened in the world. It was a feeling of well-being and inspiration and togetherness and goodness," said McDaniels. "People say Run-DMC helped revitalize Aerosmith's career. It brought rock and hip-hop together; it brought old people and young people together; it brought different generations together. Because of 'Walk This Way' we did something impossible."

Run-DMC may have had what would then have been considered to be an "unorthodox" career, but McDaniels also said even if their path was unorthodox, they were still appealing to the communities they came from, showing that "even in a dirt-poor ghetto there was some good;" valuing the wisdom of their elders, especially those who were "messing up," and sharing that knowledge with young people.

"There's no such thing as a generation gap. It's an information gap. We don't communicate. We don't share ideas. But when we do, that's when innovation takes place and creates opportunities for everybody."

Through another chance life encounter—a three-hour-long fanboy conversation about comics with Eminem's A&R rep—McDaniels has been able to fulfill his childhood dream of making comics with his own comic book company, Darryl Makes Comics (DMC). He's also fulfilling his childhood "rock and roll fantasy," working on a project called "Dynamic Musical Collaborations" (again, DMC) that has him collaborating with all his favorite punk rock, classic rock, and folk-rock legends, including Joan Jett, Dave Navarro, and Sammy Hagar and performing the Run-DMC catalogue with a live band called DMC and the Hellraisers.

"There's always a way to elevate, innovate, repackage, recreate, but still maintain the effect that you want to have," he said. "Like in your business, instead of being a 'nursing home,' I'm being 'a fully functional wellness facility for people who are just a little bit older than your baby."

McDaniels has also found himself something of an inadvertent advocate for mental health. He shared a story about a time when he was suicidal and abusing alcohol, and very nearly jumped off the roof of a building.

"I was in the prison of depression," he said, but instead of succumbing to it, he went to rehab and went to therapy. "That saved me."

"There's always a way to elevate, innovate, repackage, recreate, but still maintain the effect that you want to have"

He was generous in sharing his experience with other people who were struggling, and finally someone suggested to him that he write a book. At first he resisted, not wanting to seem like he was cashing in on people's problems until he was convinced that by writing a book he could help so many more people than he could in person. So, he wrote Ten Ways Not to Commit Suicide: A Memoir.

"Whatever mental health issue you have, don’t be ashamed of it," he said. "There is nothing wrong with somebody saying, 'I feel like killing myself.' What's been wrong is how we react to someone saying that."

He continued, "Everybody is connected to everybody, and everybody has a purpose. Even with me, I'm not a therapist but I guess I put an innovative twist on how people can help themselves by admitting that I went to get help…We’re all in this together."

At 55 years old, McDaniels has had a long, accomplished, fruitful, and completely unexpected career. While his creativity and knowledge helped get him there, it was his willingness to be bold, take risks, and embrace unlikely partnerships that pushed him to the top. In senior housing, that same boldness—that the willingness to take chances, stand out in a sea of sameness, form unusual partnerships, appealing to unique tastes, and "keeping it real"—will be similarly rewarded. It’s like that, and that's the way it is.