What Can Senior Living Do to Reach 100% Occupancy? 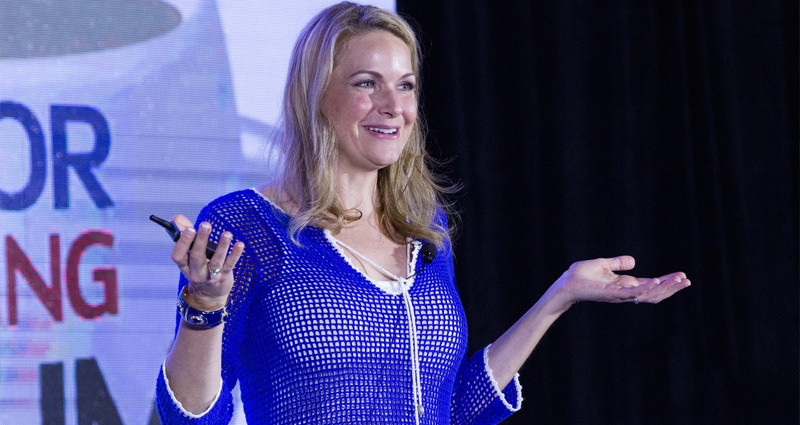 In an industry known for high turnover and resistance to change, what’s more important for senior living—trying to look good or trying to achieve the best results possible?

Based on other fields the answer would surprise you—as long as they’re not outright failing, people would often rather look good than achieve “winning” results while looking “stupid” or stepping out of their comfort zones. Steve Moran, Publisher of Senior Housing Forum, a journalist who’s spent decades studying the senior living industry, draws a comparison with basketball, where superstars like Wilt Chamberlain lived with poor free-throw averages rather than look foolish and shoot underhanded “granny shots.”

An interactive workshop at the 2017 Senior Living Innovation Forum explored how customer service and sales intersect to create the perfect storm of full occupancy and delighted team members.

With average senior living occupancy hovering near 90%, Moran and co-presenter Denise Scott, President of Drive, examined ways in which employee attitudes can be improved and senior living’s approach to sales/marketing refined to push that unacceptably “average” performance closer to 100%.

“Statistics show that when you shoot free-throws granny style, you make more baskets.”

“Statistics show that when you shoot free-throws granny style, you make more baskets, but NBA players (except for a few outliers) are afraid of looking girly or silly. Plus everybody else does it the other way,” says Moran.

Moran posed the question, “Average is the best of the worst and the worst of the best. Is this good enough? Everybody in senior living is proud of meeting the average. I don’t think that should be considered good enough.”

“Most senior living communities are so similar that you can beat that market,” he says. “I know organizations that are running at 97% to 99% occupancy, so it can be done.” 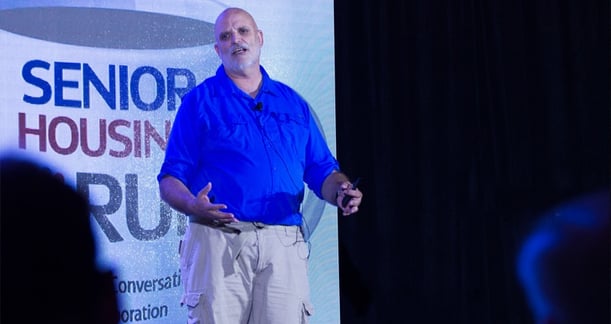 Engaging in audience participation exercises, Moran made a key point—it’s often easier to achieve results by focusing more on a smaller pool of leads, rather than casting a wider net.

Drive’s Scott described an example of abysmal customer service, which she experienced in line at the Denver airport in 2015. Running late to meet her family for a hiking trip in the Black Hills of South Dakota, Scott ended up trembling and in tears after coping with an agent without maps, access to Google or a list of airports in South Dakota.

Discussing poor service in the senior living industry, Scott divided the blame between “nature” and “nurture.” Many employees – though technically competent – are natural “Debbie Downers” from childhood. With employees in this category, there’s very little that can be done to improve their attitudes, and, even though they may be doing an adequate job, these employees bring down organizations, lowering the mood of fellow employees and bringing down senior residents.

“I’m a firm believer that we have people who don’t care, for some its nature and others nurture,” she says. “We have people who are just miserable in life, and then we have the people that we nurture to be that way.”

Actively disengaged employees are found across job categories and pay grades, she says, siting a VP of Marketing from a focus who actually said, “No one tells me anything about our marketing plans.” 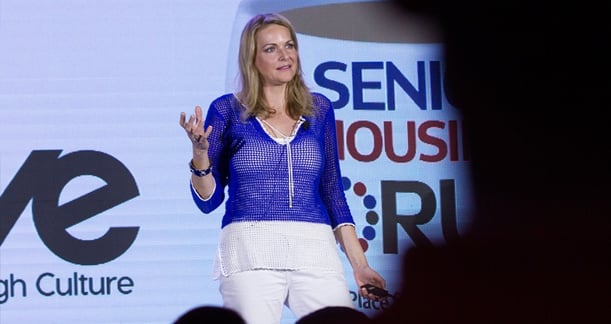 She describes her own frustrating experience trying to rehabilitate a nurse with a congenitally bad attitude. “I could feel her presence. I could see the looks on the faces of the people she worked with. It would take everything in me to just say ‘good morning’ to her,” Scott recalls.  “I would say, ‘She’s a good nurse. She’s not just good with people.’  I let that situation go on way further than I should have. (Ultimately), she was just a miserable human being.” However, she adds that many “downer” employees get that way when their initial efforts to go above-and-beyond are shot down.

The 50% in the middle she compares to Homer Simpson, who, though not actively negative, tend to do the minimum amount of work.

“My goal is to keep getting smiles from residents and to hear my name called when they need something.”
— Maintenance Assistant in a Drive Focus Group

The 33% of actively engaged employees she compares to the hyper-friendly, always-helpful “Target Ladies” from another Saturday Night Live skit. She quotes an outstanding maintenance assistant from one of Drive’s clients.  “My goal is to keep getting smiles from residents and to hear my name called when they need something. If I’m doing that, I’m doing my job.”

Taking an overview of the problem, she emphasizes, “That means only one-of-three people in an organization is actively engaged in their work.”

One of Scott’s solutions is find specific ways to nurture and celebrate “rock stars” within organizations. By realigning corporate values, they begin the process of attracting positive employees and adjusting the inertia of existing staff.

Rock star employees are eager to learn, take on more responsibilities and try new approaches to problems. “They’re creative. They want to do things themselves. They’re eager to further their education and they’re making suggestions,” she says.

With many senior living facilities showing 40% annual turnover and others failing to even measure this vital statistic, Scott asked for and shared suggestions for retaining staff, including holding employees accountable for their behavior toward fellow staff members and frequently asking team members what stands in the way of doing their best work.

“Mind your culture the same way you do your bottom line.”

“Mind your culture the same way you do your bottom line,” she says. “Would you let 40% of your residents walk out the door and go someplace else? Yet, many senior facilities don’t measure turnover.”

Scott adds that shrinking turnover will only grow more essential as employee pool shrinks. “If you think the gap in our field is bad now with recruiting staff, we’ll need another 1.3 million people in the next 10 years,” she says. “I have clients that can’t take new admissions (due to staff shortages).”

Addressing the issue of low occupancy, Moran listed a handful of factors, from technology making it easier for seniors to remain in their homes longer to seniors relocating to Ecuador, Panama and other countries with more affordable economies.

Finally, Scott adds that sales representatives often assume that money is the key issue when meeting with prospects. “They assume money is the problem and begin offering discounts right away,” rather than spending more time asking questions and actively listening to their concerns.

“We need to assume that our industry’s problems can be fixed,” he says.