By applying ingenuity and reaching out to Millennials, working parents, teens and younger seniors looking for part-time employment, the senior living industry can jumpstart recruitment and stop the bleeding on its miserable retention rates, says OnShift’s Mark Woodka.

The CEO with a background in sales and marketing shared three suggestions for senior living executives asking, “Where are the good employees?” He advises:

1. Get Creative in Where You Look for Candidates and How you manage shifts.
2. Modernize Your Practices. Improve the candidate experience to drive applicants.
3. Invest in Employee Engagement. Get feedback/act upon it/Reward employee contributions.

“Turnover is costing this industry a fortune and every percentage point we can reduce it is a significant savings for us,” Woodka said. Working with senior living, post-acute care and other healthcare clients, OnShift provides software and services to address workforce challenges, including recruitment and retention.

At the Senior Living Innovation Forum, Woodka presented a number of depressing statistics, under the headline of “FAKE NEWS,” then challenged these numbers with fresh insights and solutions OnShift has developed for clients.

“The average length a job in senior living stays open is 39 days,” he said. “Facilities are seeing unexpected moveout, providers are turning away residents and not offering ancillary services because they don’t have the staff to do it.”

Unemployment rates are low (3.9%), but Woodka believes there are better ways to recruit from those 6.4 million searching for jobs, as well as from pools that aren’t documented by this statistic, including:

Senior living operators usually divide the day into three 8-hour shifts, but Woodka believes greater flexibility, including 4-hour and even 2-hour shifts, could meet the need during the busiest times of the day (particularly mornings) and make the industry appealing for workers who want or need flexibility, whether that means an afternoon of golf for a 60-year old, or picking kids up from school for a mom in her 20s.

How to Recruit Millennials

Woodka described the process of working with two partners to boost recruitment. With the first, they used Facebook to increase the number of applicants at a rural Kansas job fair from 1-2 to 8-9. For another, they more than doubled the number of applications (57) over a 30-day period.

Were their initiatives a success? Emphatically, no. “Not a single person got hired.”

Why? The employers were waiting days to respond to applicants and leaving voicemail messages to schedule interviews, with few applicants turning up for their appointments.

“What went wrong? First, they took too long to process the applications. Good candidates will be gone by then. Also, they called them. Millennials don’t use their phone to talk to people and they don’t respond to voicemail,” he said. “So we thought maybe this isn’t a sourcing problem, maybe this is a candidate experience problem. Maybe the candidates are expecting something different.”

Woodka said solutions included texting applicants immediately after receiving their applications. “And as soon as they replied, we immediately set up interviews. This effort was really successful, with a 90% response rate.”

Client results included four times the hires in half the time and 8-12 new hires in just 14 days, he added. “When we interviewed candidates about his process, nine out of ten were impressed with the process,” he said. “They thought it was cool they used tech to get them in.”

“As an industry, we’ve been resident-centric. We need to be more employee-centric.”

Senior living spends too much time focusing on problem employees while ignoring those who keep their heads down and do their jobs. “Why do they leave? Simple, they don’t feel valued. They show up every day, do a good job and don’t get recognized. Often, their supervisors don’t know their names.”

What do these employees want? Their requests are simple and fairly easy to satisfy, he says: 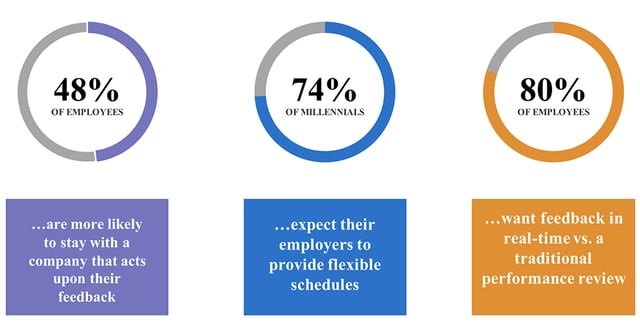 With more than 40% of new hires gone after 90 days or less, annual performance reviews seem pointless. Instead, he recommends using short, to-the-point quarterly reviews, complemented by one-to-three question Pulse surveys sent to employees’ phones. These can be as simple as asking, “How Was Your Day?”

A Big Brother Approach? He said most employees don’t think so. Even when they’re receiving messages reminding them of how many “call offs” they have in a month. “They say, ‘No, I’d rather know I was going to get written up before it happens.”

Woodka concluded by stressing that perfection or checking every box isn’t necessary for these techniques to succeed.

If senior living providers applied just some of these recommendations, they would be ahead of the competition and see a bump in recruitment, retention and employee satisfaction.

“And you don’t have to be great at all these things, just better than the guy down the street.”