At 92, Inventor is (Senior) Living Her Dream 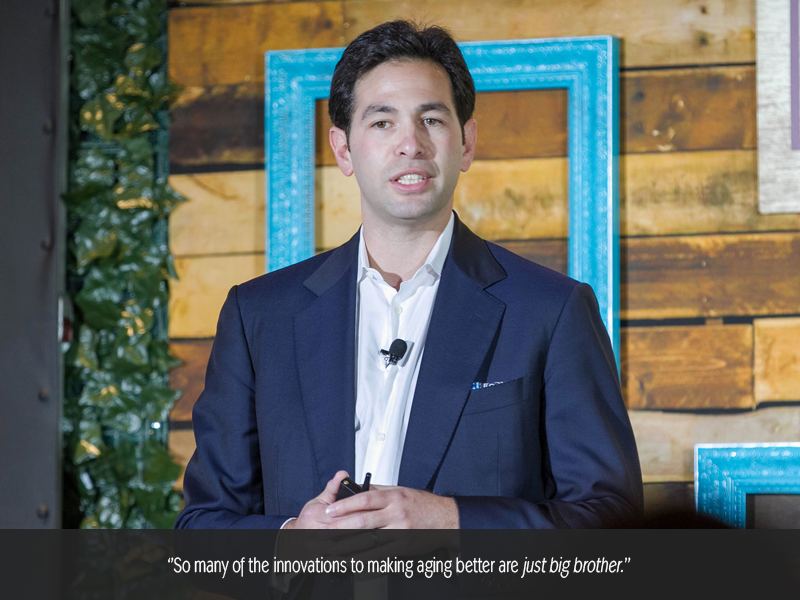 “So many of the innovations to making aging better are just big brother,” says the practicing geriatrician and chief innovation officer at the Motion Picture & Television Fund (MPTF).

The problem with the current status of senior living is that the experts trying to improve it are focusing almost exclusively on issues like monitoring and preventing falls and healthcare costs, he says. “People do not want their kids to know every time they open the refrigerator and every time they go to the toilet…after a long life, they’re looking for the next chapter.”

“Purpose is going to become a buzzword,” he predicts.

Scott Kaiser was joined at the recent Senior Living Innovation Forum with a legally blind senior that fully personifies “purpose.”

At 92, Barbara Beskind has had multiple careers – author, art historian, army officer and occupational therapist. An inventor from age eight, she now works as a designer and inventor for IDEO, one of the world's largest and most distinguished design and innovation consulting firms.

This holder of multiple patents sat down with Kaiser to discuss her work (including how she landed her dream job at 89), the impact of continuing to work and volunteer into our “retirement" years, her thoughts on ways to empower others in her age group and her design for a senior living co-op.

A Second Chance at Inventing

Born in the 1920s, Beskind (nee Knickerbocker) designed her first toy, a rocking horse, at age eight and at 10 announced that she was going to be an inventor. However, like many young women of her era, she was told "no" by both family and the educational system, which didn’t even accept women into engineering programs in those days.

Instead, she focused on home economics and earned a degree in applied art and design before entering the army. She retired as a major in 1966, after 20 years of service and transitioned into a career as an occupational therapist.

IDEO came into her life as she neared her 90s, looking for a fresh challenge.

“In 2013, I saw David Kelley, the founder of IDEO, on ‘60 Minutes,’” she says. Beskind was drawn to IDEO’s diverse team membership that welcomed employees with other background experiences.

So she typed a letter and then “sent it by snail mail, which I think got their attention.” Now she takes the train into San Francisco or Palo Alto every Thursday. “They embrace the idea that everybody’s ideas count. Everybody is decades younger than I am and I’m very proud to be accepted.” 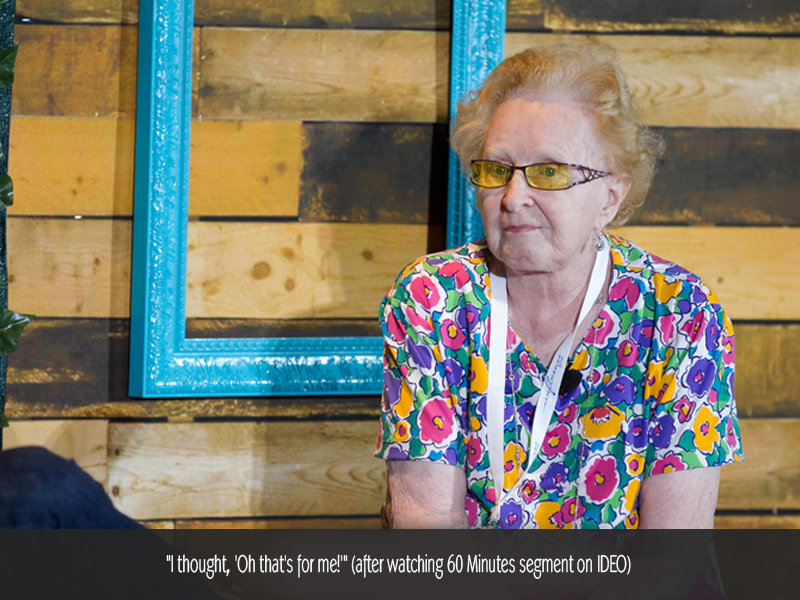 At IDEO, “David Kelly sets the tone. It’s the most exhilarating, egalitarian experience I’ve ever had,” Beskind says. “My experience at IDEO has really been the frosting to my life, such an illuminating and valued experience.”

One takeaway for the other seniors in her community: “I feel that everyone has to have and maintain some specific identity as you age. As you age you have to have a clear identity. My identity is that "She’s the only one that goes to work.”

Putting her occupational therapy and hands-on experience as a senior to use, the ninety-something is helping IDEO innovate the traditional walker.

“For two years I’ve been trying to improve the quality of the walker. The walkers we have are abominable,” she says. “Walkers were designed for rehabilitation and they only incentivize people to lean and lose their balance. If you don’t get off a walker as soon as possible, you’ll lose your automatic gait pattern.”

So she’s designed a walker that allows for vertical handles, which help users maintain normal gait patterns, sustaining the necessary strength in their glutes and hips.

Where Are the Architects?

Inventors have begun embracing the challenges seniors face; Architects, however, have been late getting to the game.

“I want to see good design and I would like to work with architects."

I think they’ve been remiss (by ignoring senior living). I think they’re out of the loop,” says Beskind, who has taken on the concept herself.

“I have designed a whole co-op of independent living, assisted living and memory care,” says the inventor, whose facility would run on a buddy system pairing up residents with compatible physical and mental challenges to assist each other. 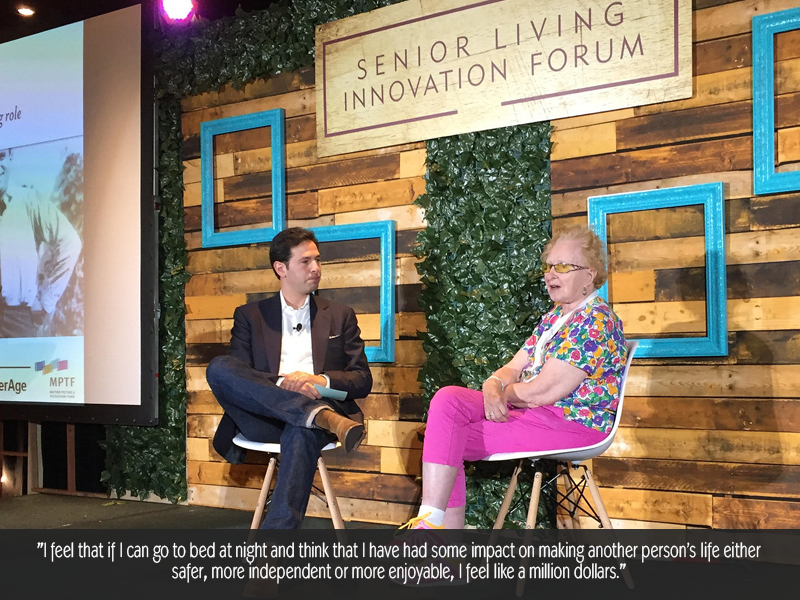 Kaiser and Beskind addressed questions from the audience, including one asking about the role of “senior living operators” in helping people find their identity in terms of work. She refused to blame the system for the perceived lethargy of her peers, adding that perhaps “you should write off this generation and start with those who are 50 or 60 years old and tell them they can be a viable part of society as long as they live.”

She did, however, call to task the approach of many facilities.

“I spent three months in a skilled nursing home (recovering from an injury) and I know what you’re talking about,” she says.

“I think everybody from the CEO down to a busboy should spend 48 hours each year as a patient in whatever level of care they are providing. You only know what it's like if you’ve been there.”

If we allow people to infantilize us, it’s out own fault, in many cases, Beskind says. “Just get out of the place. Develop a community perspective. If your perspective is limited to just your four walls, that’s what you’ll have.”

She adds, “Seniors are the most untapped resource the community has,” urging her fellow residents to be more active socially through volunteering.

“I think we need more opportunities for seniors to be respected for what they bring to the table, but in some cases, we’re our own worst enemies. We need to change the culture completely to bring empowerment to the seniors.”

An easily accessible job-and-volunteer exchange – one that helps match seniors with potential employers and non-profits looking for volunteers – would be a big help in senior communities, she says.

Though it’s hard to find people who have “a depth or continuity of conversation,” in her community, overall Beskind enjoys her friendships with fellow seniors and takes opportunities to help in her community living with cognitive issues to physical challenges.

“I feel that if I can go to bed at night and think that I have had some impact on making another person’s life either safer, more independent or more enjoyable, I feel like a million dollars.”

“People who have plans live to fulfill them.”

You can view the full session with Scott Kaiser and Barbara Beskind below: