A big fan of Kubrick’s 2001: a Space Odyssey, Ron Galloway believes that ambient intelligence – a kinder, gentler take on “HAL The computer” – will soon be helping manage our daily lives, especially as our population lives longer.

Senior living will resemble a benevolent form of 2001’s spaceship, with computers and sensors monitoring and guiding the lives of senior residents, he says. “You can think of the spaceship as an assisted living facility.”

Addressing the topic “Ambient Intelligence in Senior Living,” the researcher, director of four films and author of dozens of books shared his thoughts on what’s happening now and what will be happening soon at the 2015 Senior Living Innovation Forum.

In his presentation, writings and other public appearances, the highly respected researcher and “futurist” has predicted that in the next few years U.S. assisted living facilities will be monitored by smart cameras, floor sensors and other devices, while residents will all have highly responsive “wearables,” that track their movements and isolate unusual and perhaps dangerous behavior patterns.

Some of the advances Galloway anticipates are already in place throughout senior care facilities in Europe.

The image many of us have of elders as grumpy, unhappy and weak is often misguided, says Galloway, who was born in 1962. “Typically aging is associated with decline,” but people in their 50s and older are generally content and well-adjusted, he says, citing himself as an example. Older folks are more chilled out than we think they are, the researcher says.

To make a point about successful aging, he cites acclaimed cellist Pablo Casals, who, at 70, married a woman in her 20s and continued to practice four hours a day into his 90s, as well as a friend of his father’s, a doctor who “birthed over 46,000 babies” and died at 103.

His statistical overview is even more fascinating. “Never before have the majority of middle-aged adults had living parents in human history,” says Galloway. 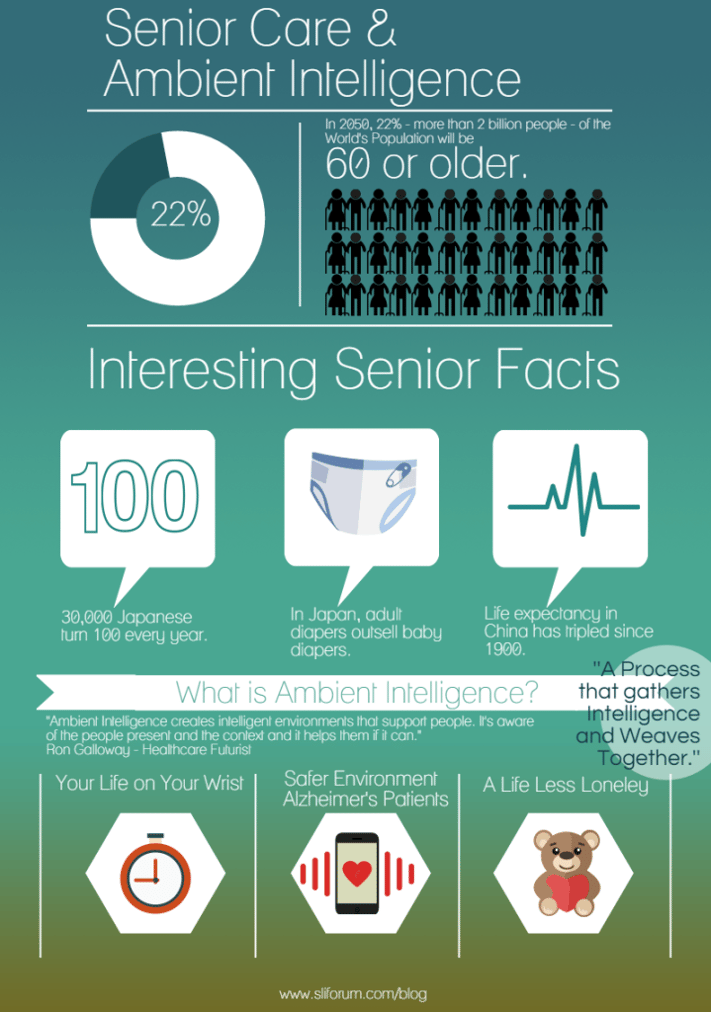 ‘Black Swans’ Are Changing Everything

Galloway expects life expectancies in The U.S., Japan and other industrialized nations to increase even more over the next few decades.

Technology – especially data collection and analysis – will play a key role. “Healthcare is becoming all about data. It’s a ‘Black Swan’ event that comes out of nowhere and changes everything.”

Black Swan events are defined as “a metaphor that describes an event that comes as a surprise, has a major effect, and is often inappropriately rationalized after the fact with the benefit of hindsight.” Galloway notes examples, such as “fracking” which transformed the U.S. from an energy importer to an exporter, almost overnight. Other examples include the ways in which FedEx changed shipping in the 1970s and Wal-Mart has shifted the retail industry over the past few decades.

He adds: “And Amazon is black swanning everybody.”

Fascinating Facts About Our Aging Population

Galloway shares a number of compelling statistics and punctures a few accepted myths—the biggest of which is the population “explosion.” The only area where the population is growing – where the birth rate is actually increasing – is Africa, he says.

“Everywhere else, the fertility rate is collapsing.” 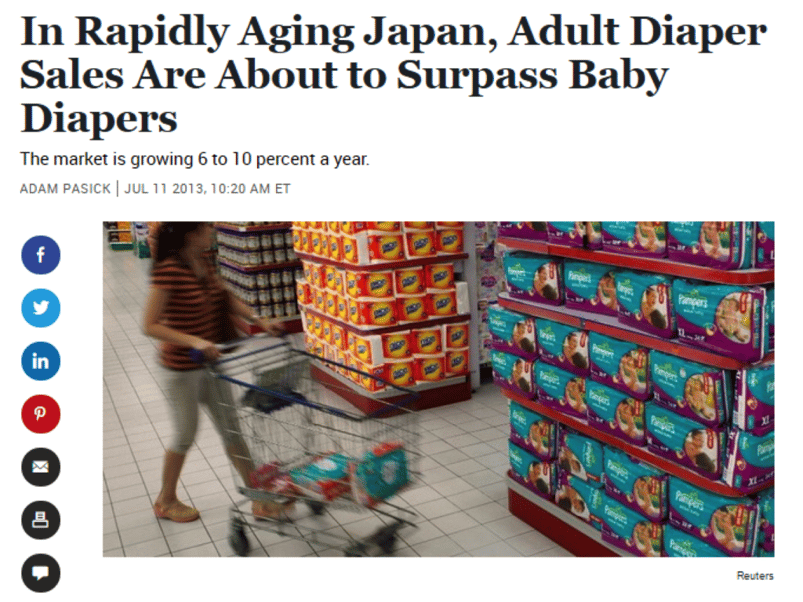 What is Ambient Intelligence?

Ambient Intelligence creates intelligent environments that support people. “It’s aware of the people present and the context and it helps them if it can,” he says, describing it as a process that gathers intelligence and weaves it together.

“Ambient intelligence gathers information, gives it context and acts on it,” he says, explaining that AI devices will collect information on your behavior patterns and learn to anticipate actions and needs."

A recent Amazon patent offers a glimpse into the immediate future. Based on the information they’ve gathered on customer shopping habits, Amazon is beginning to ship products to delivery centers near their customers before these customers actually order a product – based on data analysis and the prediction that they will order it in the near future, Galloway says.

“And Uber will be delivering these packages,” he says. “During their down-time, Uber drivers will be providing same-day delivery for Amazon.” 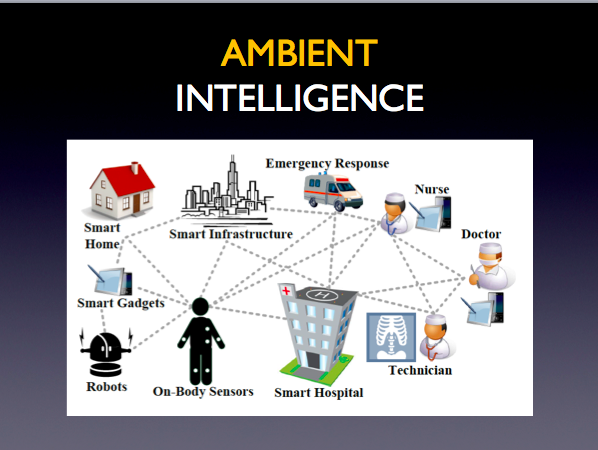 Your Life on Your Wrist

The booming popularity of Fitbits over the past two years is just a primitive example of the types of devices we’ll soon be using to track every aspect of our lives, says Galloway. “Your health and money will be on your wrist.”

The pool of doctors and other trained medical personnel is shrinking, which means various forms of technology will be taking the place of people.

“We’re running out of doctors,” he says. “Medicine is becoming completely data driven.” However, this shrinking physician pool will be able to rely on IBM’s Watson and similar services to analyze genetic information and other healthcare data to help diagnose patients and suggest treatment options.

A Safer Environment for Alzheimer’s Patients

A powerful specific example is the use of ambient intelligence to detect the onset of Alzheimer’s. Sensors that monitor your daily behavior patterns will begin to pick up on changes in your behavior, such as the failure to measure ingredients while cooking or forgetting to turn off a stove after meal preparation is complete, he says.

“It’s especially useful if you live far away form your parents,” the futurist says, adding that this form of monitoring will be common in the U.S. sooner than we expect. “It’s already being done in Europe.”

In assisted living facilities, accelerometer wrist monitoring systems will improve safety and quality of life, while reducing the need for nurses and attendants (groups already in short supply). “Bracelets will show where patients are and people with Alzheimer’s will get into places they shouldn’t be less often.”

On occasions when frail Alzheimer’s patients do have accidents – falling down stairs, for example – the indoor GPS in their monitoring bracelet will alert nursing home/assisted living facility staff to their exact location, while electronic medical records will provide staff with the information necessary to treat the patient’s condition.

Galloway emphasizes the importance of touch and companionship in the lives of seniors, from the impact of bringing his pet Labrador to a nursing home (“Older people want something that’s not afraid to touch them.”) to apps like Apple’s Siri and Amazon Echo (the a voice-activated wireless speaker and voice command device).

He predicts most seniors will own a device that combines the more appealing features of a Roomba vacuum cleaner and a Furby.

These devices will watch you, be able to read facial expressions and notice behavior that’s out of the ordinary, such as remaining in one room for too long a time.

“It’s going to be unobtrusive and its gonna look friendly like Mickey Mouse,” he says. “Everybody will have one of these.”

Ron Galloway's full presentation from the 2015 Senior Living Innovation Forum can be viewed below. To learn more about Ron visit his website at: www.rongalloway.com