The Future of Senior Care is MESH

Dr. Bill Thomas, Founder of the Eden Alternative and creator of The Green House Project gave a provocative, captivating (and at times humorous) speech to kick off the 2015 Senior Living Innovation Forum. While he touched upon a variety of themes, Dr. Thomas focused a majority of his talk on the concept of the Continuum of Care.

The Continuum of Care is an Optical Illusion

“The first thing that I’m on a rampage about these days,” said Thomas early in his talk, “are words that actually first appeared in the literature in 1982 in a peer-reviewed nursing journal. The words: Continuum of Care”. Dr. Thomas noted that after 30 years, he’s still not impressed. “First off, if something is going to be a continuum...it has to be continuous. But anyone in this room who's ever had an older relative become involved in aging services knows that it ain't continuous! Not even close."

"What we really have are segments of care...separated by terrifying gaps that are vast and empty.”

Dr. Thomas believes that there is no continuum of care. That it is an “optical illusion.” “The continuum of care probably was an interesting and useful tool for thinking in the eighties; before you know, cell phones and the Internet. But really it's not useful to us now and the bad thing about it is I witness with my own eyes and ears, healthcare executives standing up in front of me and saying things that are not true. Like “We've got a continuum of care”. That is not true, and it is never good for business to organize your efforts around something that is not true!”

The New Approach Should be MESH Care 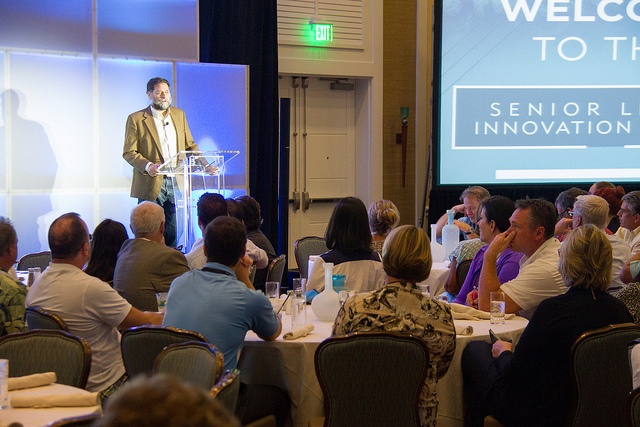 “No one has to come up with a miracle drug, no one has to invent some amazing molecule, we can all be a hero if we help the people Move, Eat, Sleep and Heal. The future of wellbeing is MESH Care.”

Dr. Thomas drove home the message that the MESH concept can lead companies in the senior living space to collaborate in very exciting new ways. “Technology, Design, Material science, Architecture, clinical care, better understanding of aging, all of that goes into the MESH’’.

American Hospitals Are Killing Our Elders

For many years during Dr. Thomas’ clinical practice, he cared for people who had been in a hospital and then came back to him, in many cases, worse off than when he sent them to the hospital in the first place. According to Thomas, the “continuum of care” has led us in the wrong direction. “American hospitals are killing our elders”.

''It is estimated by the Institute of Medicine, that last year 90,000 elders lost their lives in hospitals due to errors.''

Hospitals are uniquely ill-suited for the wellbeing of older people. ‘’If I entered some bizarro world, where I was turned into a person who wanted to do the worst thing I could possibly imagine, for older people who are sick, I would design a hospital and I would put older people in it.’’ says Thomas.

In the future, according to Thomas, the only people who are going to end up in a hospital are people who need or want intensivist care. “If you need a new kidney, you’re not doing that at home. That kind of care, the hospital is very good at it.”

We Own the Experience of Older People

First: ‘’Aging is the most powerful tool and the source of the greatest advantages of anything human beings have ever created.’’

Second: ‘’We have been going down the wrong road on the Continuum of Care, we’ve got to go to the basics: Move, Eat, Sleep, Heal. Create a MESH that supports people where they want to live.’’

Third: ‘’We live in an ageist society; ageism is impacting you and your innovations right now, today. Deal with it.’’

You can watch Bill Thomas' full speech from the Senior Living Innovation Forum below: