Everyone in senior housing generally agrees that changes—BIG changes—are coming to the industry, and a lot of players are unprepared.

In a candid discussion at the Senior Living Innovation Forum, panelists talked more about those changes and what their respective companies are doing to address them head-on, from the risks they're taking to re-investing in the things that matter the most.

Moderator Charles Turner, CEO at Invidia, opened the discussion by outlining the various disruptions already happening in senior living: Medicare Advantage, post-acute care alignment, labor shortages, an increase in multi-family entrants, occupancy stats that have remained stagnant, and portfolios of communities shifting from one operator to another.

Setting aside all the things that will be coming, these are the things that are already happening that are causing disruption. Turner then turned the conversation over to the panel to discuss which disruptions they're tackling in their spaces.

Changes Are Already Happening, Ready or Not

Patricia Will, president and CEO of Belmont Village, spoke generally about the things that operators will need to change, if they haven't already.

"Our industry has made a lot of bad real estate," she said. "We have viewed the senior apartment as a sad little room where you get put." The spaces are small and cramped, with no room for most of the resident's belongings or separate areas from the primary living spaces—bedroom, bathroom, kitchen, and a small living room. They also tend to be very ADA-oriented; an ever-present reminder to the resident that this is a place of decline.

She also foresees the use of technology will not only make the workforce more efficient, but will become integral to the residents' spaces as well. Instead of a pull-cord in every unit, each resident will have an Alexa with two-way communication so that if they fall and are injured, they can just speak out loud to call for help.

"The advent of technology and real estate is terrifically important. It’s a huge challenge with a lot of expense, but this is going to be the future. If you're not on board yet, you're going to have to be."

Kai Hsiao, CEO of Eclipse Senior Living, said they got into the senior living industry because they knew it was ripe for disruption, and one of the things that an operator needs to be better at than the one they just took over is their capital structure.

"The industry is going through a bit of a reset"

Kris Engskov, president at Aegis Living (who only recently made the transition to senior living after 16 years at Starbucks, where he oversaw much of the company's global business expansion), initially warned that the industry is "vastly unprepared for what's coming." He added to Will's and Hsiao's insights that having strong partnerships are also an important piece.

"If you're not making this convenient, you're going to lose," he said, certainly a lesson he learned during his Starbucks days. "We need to get much further upstream with how we're interacting with future families. We have to get closer to these families well before it's crisis time. I think we can use our data in smarter ways that can get us much further upstream with how we interact with families."

And while that means better utilization of data collected as well as data sharing with partners, he said that that also might include getting involved in the push towards wellness and personal health, educating people on behavioral decisions that factor into their health long before those decisions have a serious negative impact. (An example he used was the link that has been established between Alzheimer's and eating red meat.) 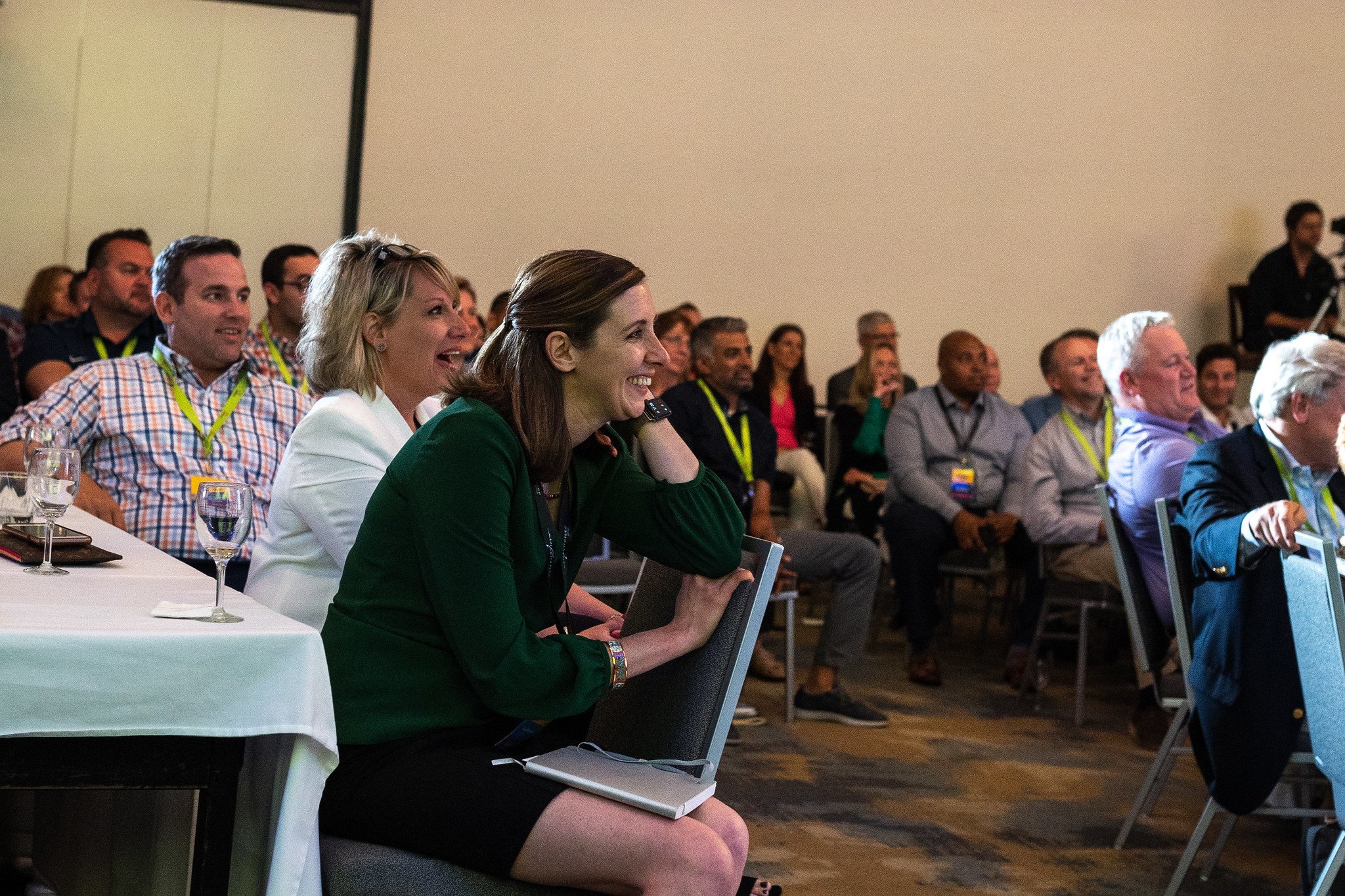 Turner then pivoted the conversation to vendors, asking the panel which types of vendors they would accept an appointment with. Hsiao said, essentially, "None unless there's ROI on what they're pitching." Will was more open to the idea, stating that she would prioritize anything relating to talent acquisition and staff retention.

"The advent of Great Place to Work has been a great thing for our organization," she said. "You get a wealth of data on how to improve your culture and your staff retention that's incredibly powerful," she said.

Engskov also said that talent and staff would be his top priority, especially as the healthcare industry as a whole continues to grow and other service-oriented industries, like brick-and-mortar retail, shrink and workers are displaced into other industries.

"We have a big opportunity and challenge to make this much more attractive as a career opportunity," he stated.

Through most of the panel, Turner proposed a number of different "what if" and "would you rather" scenarios, and one of the "would you rathers" asked the panelists if they had a $150,000 allocation for the next year but could only invest in one thing, what would it be?

Will again reiterated that her first priority would be the tenure of the staff, and if they have longevity and continuity in staffing, then she'd spend the money on paint and carpet.

"If someone is coming to live with us, the space ought to be uplifting," she said. "If it's old and tattered and ugly, [no one wants to live there]. At a minimum, no one wants to see tattered carpet and furniture that's falling apart and looks like it belongs at Goodwill."

Engskov once again put his people first, saying he would invest in training leadership. "There's no doubt in my mind you can compete with a big new fancy building if you can compete on care," he said.

Although, Will countered, if your first priority is your people, you can't discount having a nice break room. A building that Belmont operates in Mexico City has a "fabulous" employee area with a cafeteria, full-service laundry, and showers so people can bike to work, shower and get ready once they're there, have their laundry done during their shift, and have a good meal during their break.

"I would involve my employees, particularly my frontline employees. I believe they're the key. I want them to feel that I'm investing in them."

"Here in America we renovate, but we don't think enough about where people go. So we started renovating break rooms and doing some fun stuff, playing with what we've done in Mexico City, and it has been remarkable. The employees love it," she said. "We delivered more space [including more privacy in the bathrooms] as well as cooking space and better food options. If you're concerned about your employees, then it's worth the $100,000 or whatever you're going to spend to invest in the break room. It may be the best money spent, and yet it's in the back of the house. But it speaks to who works there."

Bob Kramer, founder and strategic advisor at NIC, who gave a provocative talk prior to this panel, said he would want to make sure that whatever decision was made, it wouldn't just be a top-down decision.

"I would involve my employees, particularly my frontline employees," he said. "I believe they're the key. I want them to feel that I'm investing in them."

He said that one problem with upper management going to conferences and getting a bunch of ideas for new strategies, then returning home and dictating that these new strategies get implemented, is that they don't involve the employees who are actually on the ground doing the work on a day-to-day basis and get their input as to what would actually make sense for the business (and not just create even more work for them).

"I think we have to be careful of that mentality and engage our employees so they buy into wherever we're making this investment," he said. 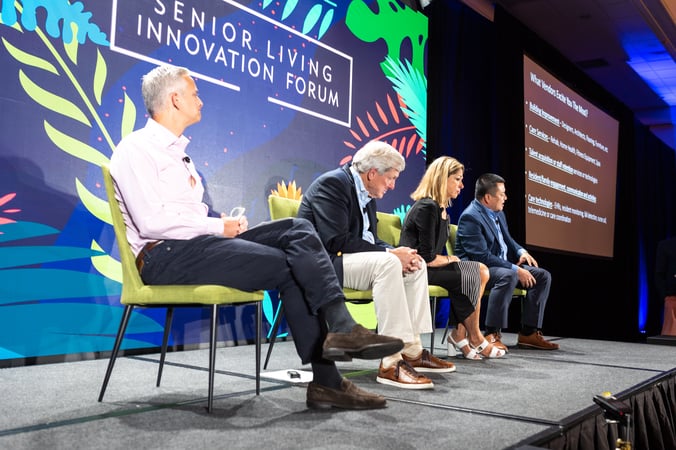 Kramer also feels that the senior living industry needs to think of its residents differently—not as people in decline with nothing left to offer, but as adults still full of life and purpose.

"We're thinking of them differently than they want to be thought of," he said. "I fully believe if we're really talking about seeing the future opportunity, we've got to see our residents differently. I really believe communities in the future will be known not just by who the residents were and what they did, but by who they are and what they do. They're going to be seeking that sense of purpose, connection, and engagement. Yes, it's going to fit whatever limitations they have, but if we really want to seize the future we've got to think differently about the customer. I see cool programs but they're often based on the same paradigm of [how we've historically thought] about the resident."

Will wholeheartedly agreed, saying that it's crucial to promote health and wellness as well as a sense of purpose, and that doing so is not the same as denying age.

"It's really important to embrace old age but make it about health and focus on wellness and prevention, and also on purpose," she said. "What Bob called 'post-retirement engagement' will be a huge part of health."

Kramer said that he heard Lisa Ryerson, president of the AARP Foundation, talk at a conference where she challenged everyone to rethink their activities directors as "purpose matchmakers."

"Activities directors are helping people pass the time in decline. Purpose matchmakers are helping you re-fire and reconnect, and find that no matter what your limitations there are still meaningful things that you can do and that you can contribute to society, and they are there to help you find that," he explained. "The goal is not to grow younger. The goal is to embrace who we are and the age we are and the unique opportunities and challenges that come with that age. There are challenges with being 18, and there are challenges with being 88. They're very different, but the human desires are exactly the same." If there were one key takeaway from this panel, it might just be "the more things change, the more they stay the same." Big changes may be coming to the senior living industry in terms of technological integration and telehealth as well as major shifts in healthcare and our overall understanding of health and wellness, but the bottom line remains the same: Take care of your people, employees and residents alike, and they'll take care of you.

Subscribe below to get the latest Senior Living Innovation Forum insights and keep up-to-date on what to expect when we hit NM in 2020 (May 31 - June 2).